The History of the Claddagh Ring 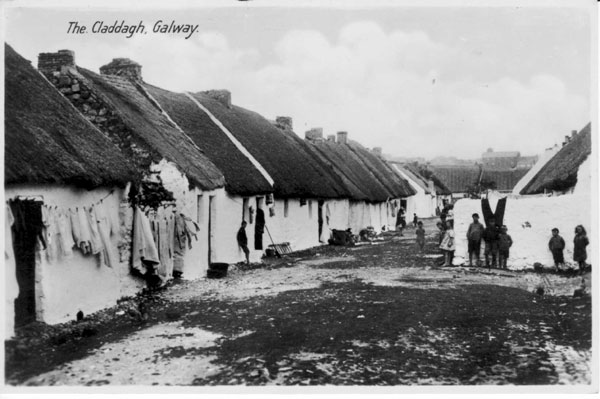 There are many stories about the Claddagh ring. Claddagh itself refers to a small fishing village just near Galway city. The Claddagh ring supposedly originated in this area. The ring has a design of a heart being encircled by a pair of delicate hands with a crown above the heart. In earlier times this design was the symbol of the “Fishing Kings of Claddagh” meaning ‘in love and friendship let us reign’. In the 17th century the symbol was first depicted on a ring which became the fashionable exchange of friends or lovers. In marriage the heart was worn towards the wrist otherwise towards the fingertips.

The original Claddagh ring is generally attributed to one Richard Joyce, of Galway. Joyce departed from Claddagh, a small fishing village where the waters of the River Corrib meet Galway Bay, on a ship en-route to the plantations of the West Indies. That week he was to was to be married, but his ship was captured by Mediterranean Algerian pirates and the crew were sold as a slaves; Richard Joyce was sold to a Moorish goldsmith who trained him in his craft. He soon became a master in his trade and hand crafted a ring for the woman at home he could not forget.

In 1689 Joyce was released after William III came to the throne of England and concluded an agreement whereby all his subjects who where held in captivity by the Moors were to be allowed return to their homes. The Moorish goldsmith offered Richard his only daughter in marriage and half his wealth if he would remain in Algiers. He declined and returned to Claddagh to find that the woman of his heart had never married. He gave her the ring and they were married and he set up a goldsmith shop in the town of Claddagh. (The Claddagh is said to be the oldest fishing village in Ireland). The earliest Claddagh rings to be traced bear his mark and the initial letters of his name, RI (Richard Joyce).

The Tradition of The Claddagh Ring

By tradition, the ring is taken to signify the wish that love and friendship should reign supreme. The hands signify friendship, the crown loyalty, and the heart love. The ring has become popular outside Galway since the middle of the last century – its spread being helped by the vast exodus from the West during the great Famine in 1847-49. These rings were kept as heirlooms with great pride and passed from mother to daughter. Today, the ring is worn extensively across Ireland, either on the right hand with the heart turned outwards showing that the wearer is “fancy free” or with the heart turned inwards to denote that he or she is “spoken for”. The pride of place is on the left hand, with the heart turned in, indicating that the wearer is happily married and the love and friendship will last forever, the two never separated.

The Claddagh Ring and 911

In this article we explore the Irish symbol of love, friendship and loyalty at ground zero, New York.

THE ORIGIN AND MEANING OF THE CLADDAGH RING

Where did the Claddagh ring get its name? Connections to The Claddagh and Galway Goldsmith Traditions.

How To Wear Your Claddagh Ring

The History of Claddagh Village and Galway City

We take a look at the fascinating history and traditions of The Claddagh Village and City of Galway.