Irish Ogham writing (pronounced ‘Oh-m‘) is a prehistoric alphabet that was used between the 4th and 10th century AD in the country of Ireland. There are various theories about how it came to be associated with mysticism; for example, some think it was developed by Ogma, The Sun-Faced God, while others believe it was made by someone else. It is also known as the Tree Alphabet since each letter represents a different natural Irish tree (for example, B stands for Beith) (birch).

The ancient Celts revered trees as spirits or as things possessed by spirits, and they worshipped them as such. Celtic mysticism is heavily based on the magical powers of certain trees, which are discussed in detail below. Ogham was a cryptic written language that linked the ancient beliefs of the Celts to the beauty of trees. The markings are centered around a long vertical reference line, known as the ‘stem,’ which is then crossed by characters made up of lines or slashes, known as ‘twigs,’ representing the branches of trees. 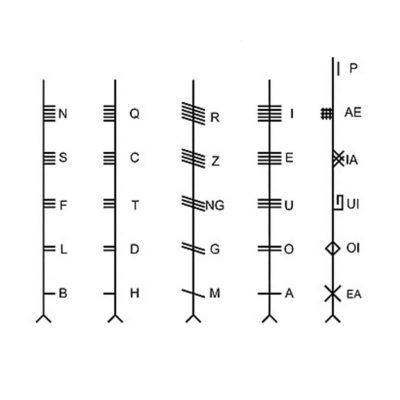 Although the alphabet was developed much earlier, evidence indicates that the surviving ogham inscriptions in Ireland date mostly from the fifth and sixth centuries. With 20 symbols organized in four groups of five, the original version of ogham conveyed roughly 80 sounds from Gaelic. Each letter was represented by one, two, three, four, or five strokes and arranged in sequences of one to five to the left, right, diagonally across, or in the center of a central stem-line (one stroke to the right is a ‘b,’ two strokes is an ‘l,’ three strokes is a ‘v/f,’ and so on).

The fact that ogham contains five vowel symbols (whereas Gaelic has ten) is one of the reasons scholars think the Latin alphabet, which employs five vowels, affected the system’s creation. The surviving stones reveal changes as new symbols were created and older ones were lost, indicating that Ogham was not a single, permanent system. A few stones include carved crosses and the Primitive Irish word KOI, which is believed to be a translation of the Christian Latin burial phrase hic iacit, which means “here lies.”

Ogham inscriptions have also been discovered in the United Kingdom, mostly in regions of post-Roman Irish immigration in Wales, Cornwall, the Isle of Man, and Scotland, but archaeologists have also found instances in Roman Silchester and Orkney. New symbols were created, existing symbols were modified, or certain characters were doubled to represent various sounds when the alphabet was used to write non-Gaelic languages. Ogham has been discovered in Shetland to depict Norse terms like dattur (daughter) and krosk (cross), and at Killaloe, Co. Clare, a particularly interesting stone contains a memorial from c.1100 dedicated to a Scandinavian settler, Torgrim, which is inscribed in Norse runes and then reproduced in ogham.

Norse and Anglo-Saxon interest in cryptic runes, as well as monastic pleasure in codes and cyphers, inspired other bards. As a result, they developed ogham adaptations that were deliberately intended to confuse the reader. For example, Nathair im ceann (snake around the head) is written as a palindrome, in which the initial letter of a word is put in the middle of a sequence, and the remainder of the letters flow out in either direction from that central point. Cossogam (Foot-ogham) or Sronogam (Nose-ogham) are adaptations of Cistercian sign language. Two fingers represent ‘l,’ while a finger laid on the nose represents an ‘a’ and two fingers an ‘o’). Gall-ogam (foreign ogam) and ogam lochlannach (Norse ogam) are two writing systems in which runic symbols are combined with ogham to create new, hybrid alphabets.

In Auraceipt na n-Éices, a seventh-century collection of grammarian knowledge known in English as the Scholar’s Primer, these medieval experiments are described. Many of these alphabets may also be seen written and drawn in the Lebor Oghaim, or Book of Oghams, in the late 14th- or early 15th-century Book of Ballymote, which can be viewed on the Dublin Institute for Advanced Studies’ website Irish Script on Screen. Under the direction of Dr Nora White, the Institute is also working on a project called Ogam in 3D, which is leading worldwide cooperation on this interesting area of European writing history and early language research.

Despite its short existence, ogham shows the flexibility and creativity of its creators, as well as the diversity of cultures that coexisted in Britain during the period.

How Did Ogham Originate?

According to legend, when God created man, he created many different languages to prevent the people from communicating globally, acquiring power, and ultimately overthrowing the god who made them. The Irish people want to develop their own distinct language that would be superior to all others. When developing the Alphabet, scholars are believed to have drawn inspiration from Latin and Greek literature, and links between the two have subsequently been discovered.

According to ancient myths, Ogmios, the Celtic god of eloquence, is said to have conjured it up. According to more recent academic speculation, it was created as a secret language that was indecipherable to neighboring British tribes that used the Latin alphabet at the time. Another theory holds that it was developed by early Christian communities who were having difficulty translating Gaelic sounds into Latin letters.

As six of the letters are named after trees, Ogham is sometimes referred to as the “Alphabet of Trees.” They were well-known for their reverence for trees and their belief that the souls of loved ones may sometimes be found inside trees after their deaths. As a result of the Ogham as an Alphabet of Trees, artists like Katie Holten have created their responses to the ancient alphabet.

Even though we may never know its true origins, Ogham jewelry continues to fascinate. It’s a mysterious and one-of-a-kind writing that’s buried in the Irish landscape. We can only speculate and continue this legacy by reading and using this beautiful language.

Love, life, and language have always had a symbolic relationship throughout history. Because the ancient Celtic civilizations recognized this, they created the Ogham alphabet, which was inspired by the trees that were important to their existence. Claddaghrings.com have grown to appreciate the power of symbols as a means of conveying sentiments when words are inadequate to communicate our emotions in modern times. As a result, a thoughtfully presented piece of jewelry communicates a message in a language that everyone understands.

We have a one-of-a-kind selection of Ogham jewelry for men and women, including necklaces and pendants and handcrafted traditional Celtic jewelry. Also available is an outstanding collection of eternity, engagement, and wedding rings in various metals such as gold, platinum, and Claddagh.