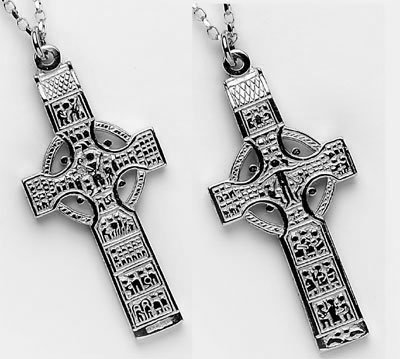 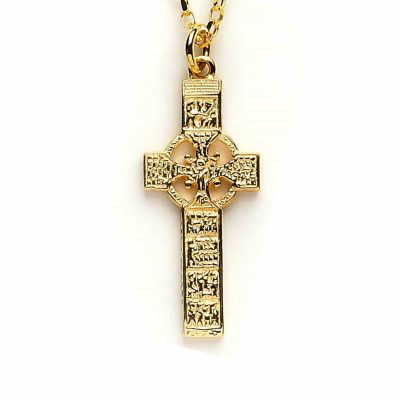 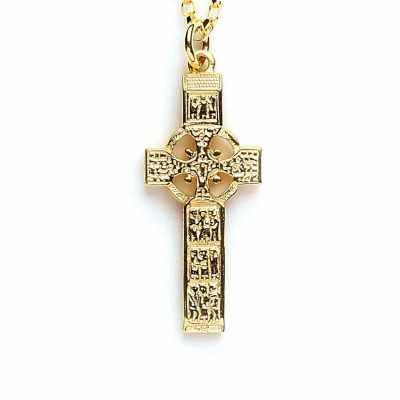 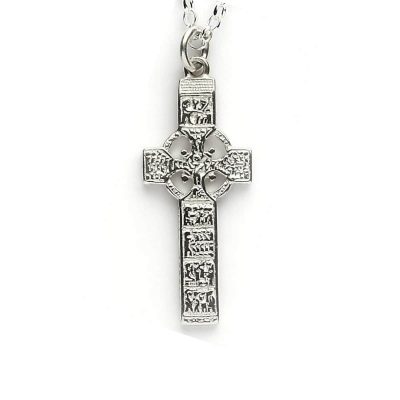 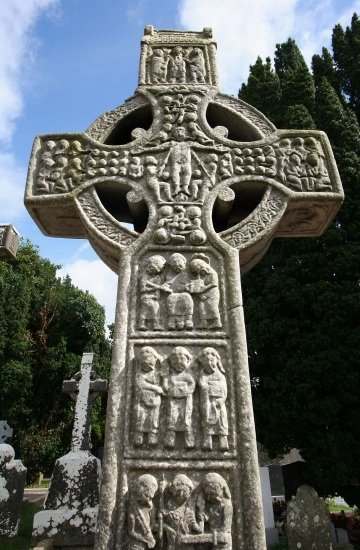 The ancient Celtic cross Muiredach discovered at the monastery of Monasterboice is authentically recreated in this lovely Celtic cross pendant, which is lovingly handcrafted in sterling silver or 10K or 14K white or yellow gold from our goldsmith workshop in Dublin, Ireland.

Of the Irish High Crosses remaining in existence, the Cross of Muiredach at Monasterboice in County Louth is one of the most stunning. The Irish inscription OR DO MUIREDACH LASNDERNAD IN CHROS, which roughly translates to “A prayer for Muiredach, for whom this cross was created,” may still be visible at the base of the western side. The majority of academics believe that this referred to Muiredach, son of Domhaill, a Monasterboice abbot who passed away around AD922.

The magnificent Crucifixion scene on the west face of the circular head’s main sculpture contrasts with an even more intriguing and ornate Last Judgement image on the east face. The west side of the shaft’s face depicts occurrences from our Lord’s life, Old Testament incidents, tales from the lives of the Saints, and symbolic images. There are scenes on the Muiredach Cross that are accessible to several interpretations, despite the fact that the scenes on our High crosses are not exclusively devoted to biblical and theological themes. From the bottom up, the scenes on the cross’ shaft are read.

These are claimed to portray Christ being arrested in the Garden; Thomas’s unbelief is said to be pushing his hand into the side of Our Lord; and Christ sitting between Peter and Paul, handing one the Gospel book and the other the keys.

Also put forth is a completely different perspective, particularly by the late Mr. Henry Morris. According to this view, the panel represents two Viking troops, and the main character is the Celtic Abbot whom they are approximately capturing. Above, the same two men with the Viking mustaches are depicted, but this time they are dressed in clerical robes, and the central person, who is as previously clean-shaven and sporting a coronal tonsure, is raising his hand in blessing.

The Keys and the Book of Gospels are held by the three ecclesiastics at the top, who are all sporting Viking mustaches. According to those who interpret the panels in this way, they tell the tale of the Viking invaders’ first encounter with the abbot, their eventual conversion to Christianity and subsequent acceptance as monks at Monasterboice, and finally the time when one of them rose to the position of abbot at the monastery.

This theory has some historical backing. Eight miles from Monasterboice, on the Louth coast, a fortified stronghold known as Annagassan became one of the earliest Viking settlements. From there, it is said that in 841 and 850, respectively, the Vikings pillaged Clonmacnoise in the west and Armagh in the north. Yet they never pillaged Monasterboice, which was a few hours’ march away. They must have maintained communication with the monastery because they stayed at Annagassan until 925. If some of them did truly convert to Christianity and eventually become monks, this would explain Monasterboice’s defenselessness.

The Cross itself provides additional proof that the more common scriptural explanation for these three panels is inadequate. While it is possible that the artist intended to depict Roman soldiers wielding weapons similar to those of the dreaded Viking soldiers and appearing like them, it is strange to give St. Thomas a Viking moustache. The doubting Thomas in this panel appears to be putting his hand into a wound on our Lord’s right side, yet our Lord is depicted getting the wound on his left side in the Crucifixion scene on the round head above. These are minor discrepancies that might have other causes, but if the Viking converts’ account is believed, all of the discrepancies vanish.