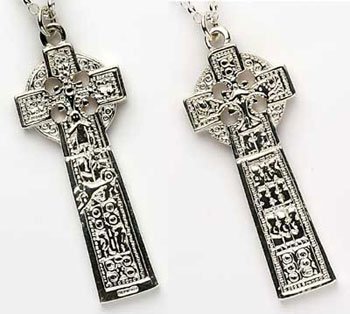 “Beloved to my heart also in the West Drumcliffe, at Culcinne’s Strand.” – St. Columcille. This is an exact duplicate of the High Cross of Drumcliffe, where St. Columcille established a monastery. It is a tribute to Christian religion and Irish history.

These words are taken from a poem credited to St. Columcille, commonly known as St. Columba, who founded the Drumcliffe monastery. He was a Donegal native and descended from a royal family. He attended monastic and bardic schools before traveling to Ireland to construct many monasteries, including Kells, Durrow, and Derry, which is close to his own hometown.

He hastily copied St. Finnian of Moville’s Book of Psalters while on one of his travels. When there was a disagreement over who should hold the copy, the High King of Ireland, Diarmuid, issued the renowned ruling, “To every cow its calf, to every book its copy.” Shortly after, a King Diarmuid fugitive took refuge with Columcille. He was slain by Diarmuid’s warriors after they chased him and broke the law of sanctuary. Colmcille reacted angrily and requested assistance from his royal kinsman. The King was beaten in a fight at Culi-dreinne, where there were numerous losses.

Columcille felt guilty that his earlier dispute with the High King had persuaded Diarmuid to break sanctuary, which had caused the fight. It is unknown whether a Synod exiled him or if exile was a punishment he chose to impose on himself. Columcille eventually departed for Scotland. He established monastic communities there, the most well-known of which was Iona, which served as his permanent residence.

At the Council of Druim Ceat in Co. Meath, we are aware that he made one illustrious return trip to Ireland. In close proximity to the site of the crucial battle, he visited Clonmacnois before founding the monastic community at Drumcliffe on his way up the west coast of Ireland to Sligo. As a token of his love, he is reported to have left his bishop’s crozier there. The magnificent cross that was eventually built there, the only significant one discovered in Sligo, is undoubtedly a testament to the Columcille family, who served as the building’s benefactors for many centuries.

The cross features biblical events and fantastical animals in vivid relief. Both figures and symbolic patterns are used to depict this. A little distance away is the poet William Butler Yeats’s grave. It is memorialized as per his request with a stone bearing the inscription he composed for himself “Cast a cold eye, On life, on death, Horseman, pass by.”